The activity-based PBF production model for manufacturing of polymer products described in the section "Costs of PBF technologies" is presented in the following picture: 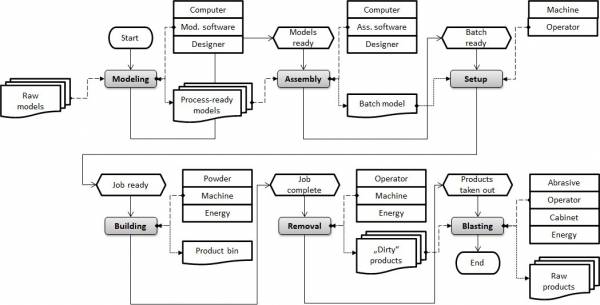 The other possibility, which is presented here is to analyze each of the cost categories for each of the activities.

As explained, the direct production costs may be expressed as a sum of direct costs of all activities (index model stands for modelling, ass for assembly, setup for setup, build for building, rem for removal and blast for blasting activity).

For each of the activities (denoted by a), the the direct cost may be expressed as a sum of labour costs (index L), material costs (index M), and energy costs (index W) as

The labour costs of each of the activities can be separated into the designer costs and operator costs. Designer costs are the cost of the work of engineers, which are typically higher than the cost of the work of operators, and they are arising in the phases of modelling and assembly. The designer labour costs can be expressed as a product of the hourly rate paid to designers (CTdes) and the time for the specific operation activity (Ta), which may be modelling or assembly.

Operator costs arise in the phases of preparation, removal and blasting, and may be expressed in a similar way just using the time unit costs of the labour of operators (CToper).

The crucial fact in analysis of material costs of building activity is that the material, which is used in the powder bed fusion technologies, is really a mixture of virgin (fresh) powder and the powder that was used, but not sintered, during the previous production processes. The latter powder is still usable, but its properties are changed to some extent - so it has to be mixed with virgin powder to form the production powder mixture. The ratio between the masses of the virgin powder and the total mass of production powder is the refreshment rate r, and it depends on the material that is used, being 50-75%. Therefore, only a part of the consumed powder represents virgin powder, which is the material cost of the building process. Since the amounts of used powder are always (and more than) sufficient to make the production mixture, it comes with no cost. One may as well say that the material cost of the used powder was taken into account when it was virgin powder, in some of the previous building processes.

The previous expression reveals the critical role that the the height of a batch plays for material costs, which are quite high in PBF technologies. The height of the batch depends on the spatial distribution of the products in a batch. That height depends on the assembly designer skills, but the work of the assembly designer has to follow the rules about the distances between parts, to take care about the anisotropy of accuracy of the production process. On the other hand, the height of a batch is affected by the number and dimensions of its products.

The importance of the height for the material costs of a batch is one of the reasons why the usual concepts about the costs of a product may not be applied to costs of PBF technologies. In the example presented in the following figure is assumed that only one product should be manufactured and that the product is a bar that has a high aspect ratio (with length being much longer than the diameter). Therefore, if the product is manufactured with the horizontal orientation, as presented on the picture on the left side, the total height of the production batch will be small. However, if, for the reasons of accuracy the product has to be manufactured in the vertical orientation, as shown in the figure on the right side, then the height of the production batch, and the related variable material costs, will be much higher than in the first case. This example demonstrated why a product may have different costs in different production batches, and why a production cost of a single product is not a meaningful concept in PBF technologies.

It should be noted that the indirect production costs are exceptionally high for all additive manufacturing technologies, and thus it is very important to be calculate them as well.

All the machines have finite operating life, and if the depreciation period of a piece of the equipment e is de years, then its time unit cost may be estimated as

with Ce-p representing the purchase cost, and Canne-m representing the annual maintenance costs, of the piece of equipment, while Tann represents duration of one year. The previous equation may be applied to the purchased PBF machines, blasting cabinet or an air compressor (e = PBF, proc, cab, comp). Considering the relatively small purchase costs and long deprecation times, as well as the lack of the maintenance costs, the equipment costs for computers used as the PC workstations may be neglected.

Software time unit costs, on the other hand, depend on the number of licenses that limit sharing of a software tool between different tasks, so that for the software for modeling and for batch assembly holds (e=soft-model and soft-ass)

with Ne-lic representing the purchased number of licenses for the software.

Consumables (like air filters fusing lamps, print heads, cleaning rolls etc.) in practice do not have depreciation period, and the time unit cost of the consumable cons-k for the piece of the equipment e may be estimated as

With these estimations of the time unit costs, the equipment costs of modeling, assembly, setup and removal may be calculated as

From the point of view of estimation of the production costs of PBF technology, the overheads comprise all the costs that are not related to the production process, but which are needed to enable and support it. A major part of the overheads represent the business costs such as administrative and management costs, renting or purchase of rooms, heating, lighting and water supply costs. As described, overhead costs are indirect costs that do not vary with level of production, and they exist even without production. One of the most used methods for estimation of the overhead costs is application of the fixed overhead rate RO to the other costs connected to a business process,

There are PBF technology costs that cannot be attributed to a specific production batch, such as transport costs, the health and safety costs (including waste disposal), material and product handling and similar costs. Unlike overheads, these costs do not arise without production process, but similar to the overheads, they are needed to enable and support the production. Since the indirect costs from this category do not arise due to an individual production batch or due to a specific production activity in the event-driven-chain methodology, they have to be assigned to the individual production batches using some cost drivers, and the duration of the activities in the event-driven-chain of the PBF technology seem as a rational choice. As the activities overlap in time, the sum of their durations does not represent the total duration of production process, and it is better to use the building time as the cost driver for estimation of the other indirect costs attributed to a single production batch. Therefore, the indirect cost of type X-k assigned to a production batch, CX-k, may be estimated as

The cost assigned to an individual product (in a batch)

where Vk and Sk (k = 1, 2,…, t) represent the volume and the surface of the k-the type of the products in the batch, which are calculated by 3D modeling and batch assembly software tools. Further, the following weighting coefficients may to be calculated

Then, using the mentioned reasoning and the calculated weighting coefficients, the production cost of a single product of type k may be estimated as

Next: Production costs of PBF technologies for metal materials